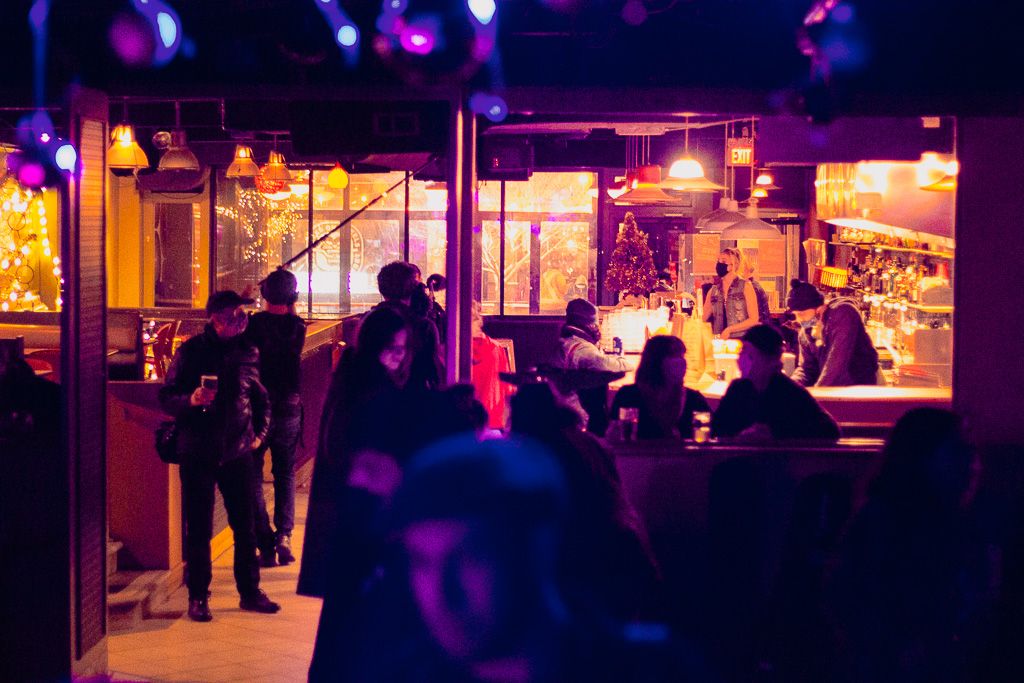 Last Thursday was a blast, not just another Toronto event but a very special event featuring some of my favourites locals playing all under one roof in the vibrant Kensington Market known as Supermarket. This venue had a hidden easter egg. It featured the legendary hand-painted signs of "Honest Ed's", which was a discount store known for handing out free food, and playing music to the locals on its anniversary, and catered to Toronto's middle and lower class. Loved and missed. Even if you're not from Toronto you may recognize this store from the flashing lights in the pizza scene in Scott Pilgrim Versus The World, which has since been demolished for condos.

This was my first time attending a show at this local venue,  and I was not disappointed, the excellent and welcoming bar staff ensured me this is a venue I would return to. Props to sweet ladies who worked behind the bar, you know who you are, thank you for your kindness. I was pleasantly surprised the venue provided free water in pitchers. This is essential to keeping a safe environment for their patrons and that's a venue I respect. The event was led by the venue fundraising superheroes; Save Toronto Music Venue.

As it came closer to the opening, friendly faces began trickling in, people whose faces are a joy to my existence and I want to hug. Those like me; seeking a night out from their troubles, singing, dancing and sometimes moshing to some good "old rock and roll and punk rock tunes. Camera crews from the CBC recorded the whole opening act; as they followed the opening act; known as Harkness, around as he toured. This was his final journey on his string of shows.  Harkness is a recognizable character with his lilac gown and futuristic visor shades. This live act is a very special, funky pop; one-man show; as he plays multiple instruments; which stood at the front of the stage on a LED-lit podium. His weapons of choice were a beautiful baritone guitar and bass that he moved back and forth to, creating beautiful layers of melody while he sang. He had a backing track of groovy percussions which really stood out to me. Throwing out picks to the crowd, while the crowd scrambled to pick them up. After that performance everyone adored Harkness.  Forever remember his name in our hearts.

Next up is one of my favourite local punk bands The Wednesday Bender, whom I also featured on one of our Critical Zero playlists " I get down", if you haven't heard this anthem, go check them out! Seriously, NOW! These 5 guys not only provide a great vibe on stage, but they also provide a good vibe off stage.  Always a joy to photograph, I love how they move a crowd through their setlist, an essential band to a good party. Each member's unique identity creates a band that everyone dreams of joining. A punk band with loud guitars, playing great tunes amongst great gents. I am excited to see them playing again next week at The Hard Luck on December 17.

By Octopi, how much more can I say I love these guys. Let's me count the ways; Wall of sound Marshal amps with powerful vocals, and powerful guitars. The making of mosh pits in and around the Toronto area. We featured them last week in our reviews, they were featured in last week's review. Even more powerful seeing these guys playing on a larger stage, bigger-than-life sound! Mad props to Kyla who works with Ashley as the event manager of Save Toronto Music Venue.

To finish the night off right the end of the show was Black Budget. My partner in crime’s band, my adoptive family. I was so proud of these guys. This was a high-energy set, and I mean it. They slammed through 9 songs in 35 minutes. Aside from Jack the drummer being the machine, Michael swayed on stage and performed high kicks from his adrenalin. Pedro the guitarist and vocalist lowered down to one knee while playing the solo; the night also included him collapsing to the ground lost in the moment while performing the cover for "Neat Neat Neat". The crowd begged for an encore, but we were all denied. I guess the crowd will have to wait for next week to see more of Black Budget as they return to The Hard Luck on December 17.

Maybe then we can convince them if enough people yell at them! A solid lineup from start to finish, I was dead tired at the end; post-show you could find me laying down on the booth seats. Exhausted from a night of fun. So much excitement, so much to say. I am glad I decided to move to Toronto to follow this musical adventure. I am so glad that live music is back. Thank you from the bottom of my heart to Save Toronto Music Venue for their support of the music scene, artists and venues. You can help them on their mission to save not only Toronto's music venues but the scene, that is slowly being devoured by "Gray Money".  A term widely used by explained perfectly by the local musician and my roommate "Just Jillian". Check out that song if you get a chance.

Photos and Review by:  runrebel.run